I'm only happy when it rains... 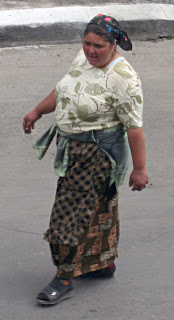 ...Not because I'm manically depressed, or manically dehydrated, or any such. It means I can sleep in past 9:00 am because the idiot tigani won't be waddling up and down my street screaming for my garbage. I often work until the wee hours of the morning and consequently wish to sleep late. This is one reason I live in a relatively quiet part of Bucharest (not an easy find, believe me!), with a few meters between me and the torrents of traffic and noisy people in their antlike hives of flats. But what happens instead is every single morning (when it's not storming), starting at 8 or 9 am, a constant parade of gypsies circulate the neighborhood, screaming at the tops of their lungs for any old wood, metal, cardboard, newspapers you might be throwing away. Once in awhile there's a more enterprising soul who ties small bundles of sticks to a larger stick and consequently screams for you to buy his deluxe handmade brooms. At first it was one gypsy, a vaguely female titanic mass of waddling fat, who rolled by on a fairly regular schedule. Once she finally screamed me awake through the closed window with its 3 layers of vacuum-filled thermopane through which THUNDER is inaudible, at least I could wait her out until the last braying echoes faded around the corner and go back to sleep. But this summer is different. Last week I could discern no less than six distinct piercing voices on the street. Old fat women, young fat women, shirtless greasy-skinned young men walking and shouting in twos and threes over each other so you can't understand either one (tigani competition? Different unions maybe?). Worse, they come around over and over, again and again all day long. As if you don't have any free crap for them to grab at 8:45, you might at 9:10 or 9:30, etc. etc. Makes no sense, but I suspect all is not what it seems.
For clarity's sake: Bucharest's gypsies (tigani) are filthy, parasitic criminals on a good day. They know no function in life but to beg, steal and breed. They are literally taught to do this as a cultural point of pride, and the news is full of stories about their refusal of state aid, of formal education, of (obviously) legitimate job offers, and even of proper citizenship which would bring medical care. They actually prefer the proud autonomy that comes with inhabiting condemned buildings or cardboard boxes, living in their own filth without water or power (except whatever they can pirate from a nearby source belonging to someone else), and home-schooling their own in the fine arts of aggressive begging, breaking and entering, and generally taking advantage of anyone kinder or weaker than they are. Before anyone tells me how off base I am, let me say I have lived here over five years now and seen/experienced every point mentioned above with my own eyes many times over. Conversely I have yet to meet any of them displaying any desire whatsoever to be a responsible, productive member of society. Twenty years ago gypsy parents literally cut arms and legs off their babies for the sole purpose of boosting their sympathy quotient while begging at stoplights. Today those babies are adults carrying on the proud family tradition, hobbling up to kiss your windshield on their crutches or empty-sleeved shirts. Nobody of authority does anything about it because these parasites have bred into superior numbers which invariably threaten solidarity and violence in reprisal for any attempt to impose proper justice on them. 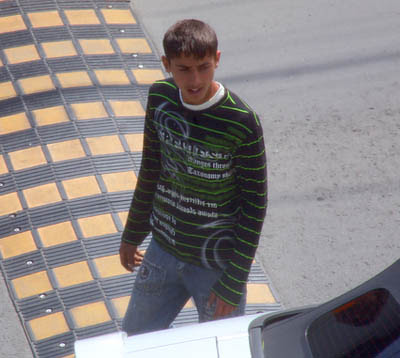 Anyway, now that you know, my theory of the increased gypsy circulation in my area is that it's a mere front for a rising crime wave. When I catch sight of one of them screaming their way along, they are invariably poking their heads over the gate of every house they pass, scanning doors, windows, and other potential points of illegal entry. I'd bet money they couldn't care less about your old wood or newspapers anymore. My car has been broken into once already, and a walk around the neighborhood reveals sidewalks almost continuously covered with broken auto glass from other victims. Three houses on my block alone have been burglarized, and lest you forget, this is a GOOD section of the city. I came home once to find one of these blokes having just opened the locked (but admittedly ancient) main door to my small bloc. He claimed "the man inside" was letting him come up to take metal left over from his renovation. Since the only other residents of the bloc were a divorced woman who was at work and a retired couple who haven't renovated their wardrobe, let alone apartment, since 1950, I quickly dismissed the lie, and the liar, in quick fashion and the door lock is now state-of-the-art. The cars parked on the street are now video surveiled and even the trash cans are locked to the fence to cure their previous monthly need to stroll off.
So what can I do? Move away? Well, maybe down the road if events permit, but not realistic right now. Call the cops? The gypsies either own them or intimidate them into uselessness. Take matters into my own hands? While I might successfully kill one or two of them, not only will it bring down hundreds more rioting for vengeance, but I'LL be the one sent to jail. So I pray for rain, because even the few scant hours of peace it brings have become so important that I'm willing to sacrifice the sunshine...
Inflicted by Volguus at roughly 1:00 AM No comments: