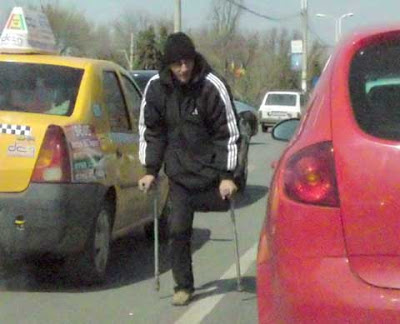 You may have seen this guy canvassing for handouts at the intersection of Lacul Tei and Doamna Ghica. What you probably haven't seen, is that when he decides he's had enough, he hops over to the bushes, straps on his artificial leg, and walks off with little more than a limp. I would not make this claim unless I had seen it with my own eyes, which I have. I drive this way every day to work, and usually a different hour each time. So it was only a matter of time until I caught him at the end of his "shift." It'll only be a matter of more time until I get a photo of it, so stay tuned.
Inflicted by Volguus at roughly 5:41 PM No comments:

License Tag of the Day 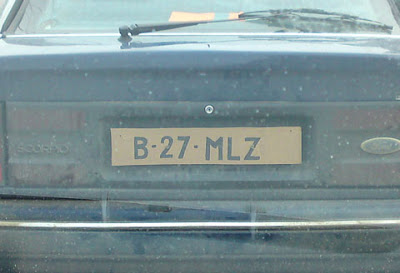 Next on the catwalk is the very latest in shipping carton cardboard, sporting some very sexy black marker accents. Sure to be all the rage later this spring, look for it everywhere.
Inflicted by Volguus at roughly 4:23 PM No comments:

Talk about a job with inherent hazards... 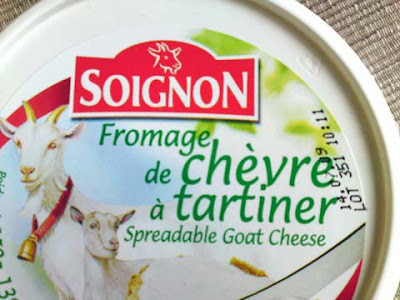 Further proof that life's pleasures don't have to be big, extravagant events, I was recently introduced to this really tasty toast topper: Spreadable Goat Cheese.
The only question I have, which nobody seems able to answer, is where the heck in the world do they raise Spreadable Goats? I get the feeling this is one of those things we're all better off not knowing...
Inflicted by Volguus at roughly 4:29 PM No comments:

Bucharest License Tag of the Day

This one caught my eye because of my history as a graphic artist and desktop publisher. In a few jobs I've had, fonts were crucial on a daily basis so I've developed a keen eye for typefaces. On its own, this doesn't look terribly out of place: 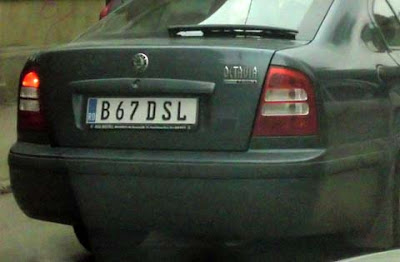 But put it next to any other Romania tag, and you can see what's amiss.

This time, the tag appeared to be done in correctly-raised metal lettering, not a hint of Sharpie in sight. But even allowing for the slightly foreshortened angle of the subject tag (I could have straightened it out in Photoshop but 1. it's not such a significant distortion, and 2. I'm lazy), note the difference in overall width of the characters, and certainly the shape (including the usage of serifs). You can directly compare the "B," "7," "S" and "L."
I took this photo at least 2 weeks ago and have yet to see another tag done in this style, so that seems to rule out the possibility that Romania is retooling its license-tag production. There are so many things that desperately need retooling in this place far more than license tags, but I digress.
So, I put the same question out there as before - anyone have an idea why this might be? It seems quite an effort and expense for a fraud, but it clearly isn't standard issue either. Hopefully we shall see...
Inflicted by Volguus at roughly 2:44 PM No comments: