License Tag of the Day 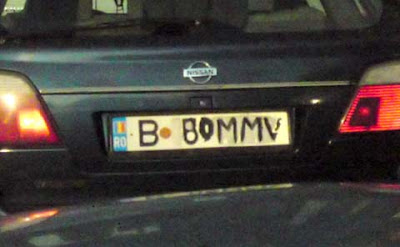 Near as I can tell, this one started life as a legitimate Bucharest tag, and the existing letters were blanked out with white paint and then new numbers drawn over them. There are almost as many innovative ways to make fake tags as there are fake tags!

Having said that, I've seen a few instances of very legitimate-looking tags where the raised letters are clearly one thing, and the machine-painted letters are another. So it appears this technique is sometimes used even by the real tag maker. Makes things a lot clearer. Not.

Inflicted by Volguus at roughly 4:28 PM No comments:

Wrong Side Driver of the Day

I said it before and I'll say it again. I grew up driving in Manhattan for many years, and then Los Angeles for a few more. The two most crowded cities in the whole USA, people! But even in the worst traffic jams, it would be rare to see someone so much as change lanes without a signal. I don't profess to know the real reason... the old-school "American drivers are just nicer" is likely giving way to "American traffic cops are getting more fascist and can read your licence plate from 5 miles" mixed with "American drivers often carry guns under their seats, do you really want to cut this guy off?" But I digress.

The point is, of all the stupid things we Americans do each day, proportionately few of them are on the road. But fear not; if you are hungry for a dose of moronic motorists, have I got the place for you!

Much has been written about Bucharest traffic. Google it and you'll see. Seriously: go right now and open a new tab, and Google "bucharest traffic." It's okay, I'll wait here.

Back? Good. Now, instead of reinventing the wheel, I'll simply be bringing you specific examples as they happen across me (hopefully not literally but it comes close sometimes). The trend these days is jumping into the oncoming traffic lanes when you don't feel like waiting in the traffic jam with the rest of us chumps. 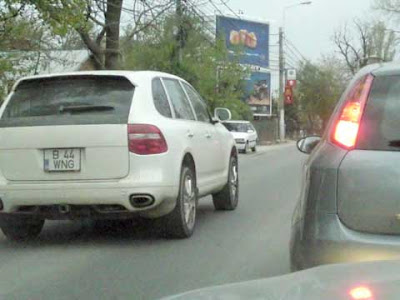 The big fat rich cars (presumably with big fat rich drivers inside) just bludgeon their way along on the wrong side, literally causing the correctly-approaching traffic to swerve around them. 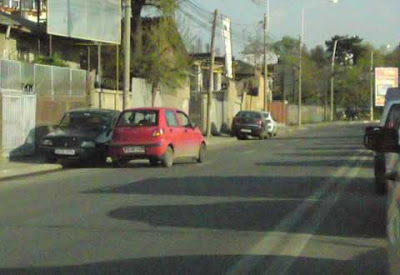 The small cars try to be more sneaky about it, driving with their hazard lights on, diving back into the correct traffic or pulling up onto the sidewalk when oncoming traffic approaches (as this little red car was doing). I've even seen them turn around and drive down the opposite side in reverse so that a still photo, such as I would take, would show a normally-facing car for that side of the road.

Thus, a new phase of construction begins on my Bucharest Motorist Wall of Shame. I hope the Internet is big enough!

*Assuming a street is paved correctly, or at all, is still quite a chancy thing in this city...

Inflicted by Volguus at roughly 4:40 PM No comments: 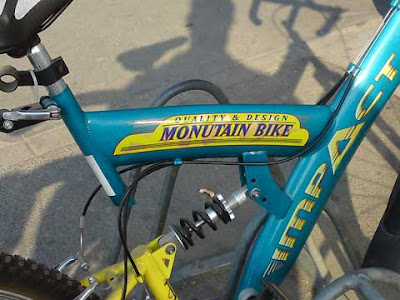 I got nothin'.
Inflicted by Volguus at roughly 5:22 PM No comments: 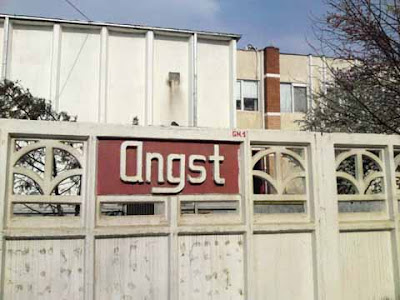 Spotted on the main road coming into Buftea: Emo Kid Manufacturing HQ! Not shown are the other divisions behind the main building: "Self-Pity" and "Whininess."
Inflicted by Volguus at roughly 5:33 PM No comments: