Every so often in the flotsam and jetsam of the Internet, a particular survey bobs to the surface, being the top things women hate about men. Putting aside for now the concerns that such a list is, at best, subjective because most answers are likely - and even admittedly - different depending on where in the month a woman is asked (yes I went THERE), and that such a list of complaints could even be narrowed down to anything needing less than infinite pixels to display, the majority of answers seem to do with hygiene, most often body hair or nail trimmings, most often being found off its body of origin, most often in the sink. But even beyond this most egregious and malevolent ...er, function of nature (do you beat Fido or Fluffy for shedding? Noooo, just Mister), is the consistent top Number One answer: leaving the toilet seat up.

Surprisingly, I got nothin' for this one.  I quite agree that it's not our best feature. Mostly because it seems permanently partnered with lousy aim. Men place tremendous value, to the extent of lifelong training, on their ability to throw, bat, kick or putt various small objects into equally small places with nanometric precision. And these same men can't aim their own built-in equipment with a fraction of that accuracy. Maybe toilets need points-tickets dispensers like skee-ball machines. Collect enough points via good aim, and redeem them for dinner.

I can joke about all this because I rarely pee standing into a regular toilet. Not only is my aim NOT better for having avoided all that nasty sports training in my youth, but because of my height, there is about an extra meter between me and the bowl. Thus, after the stream in question has left me but before it hits the porcelain pool, the rotation of the Earth has swung the toilet sufficiently eastward to throw off my aim even further.

So, cry the multitude, this leaves the basic question as unanswered as it is eternal: why do men do it?

I believe I have the answer.

At the very least, I have AN answer. And there's nothing theoretical, hypothetical or even far-fetched about it.  I LIVE it and I'm sure I'm not alone. And what's most stunning?  The deviously sinister evil genius behind this motivation for men to pee standing may lie with none other than WOMEN, possibly the very same ones who bemoan men who pee standing! And I now expose this travesty for posterity and the vindication of masculinity for generations to come.

Let's cut to the chase: we're talking about toilet fresheners. Whether they're dropped in, stuck on, hung or sprayed, a universal truth is that no man worth his gender would buy one, much less install one. These devices are right up there with potpourri and lace doilies as items which only females would deem necessary in a domicile. A man could be set on fire before admitting to the possible point of furniture, or forks, let alone items of higher bodily function.  Guaranteed, the only time a man encounters a toilet freshener is if his significant other put it there.

This in and of itself is not so horrible. Any attempt to make us males smell better is laudable, if usually doomed to fail. Certainly, as any midsummer city bus ride will attest, men are quite unable to odorproof themselves, so the ladies might as well take a whack at it. But to introduce a solution that only SEEMS like a solution, but in reality only perpetuates the problem, takes a level of shrewd craftiness that no mere male intellect could brew up. THIS: 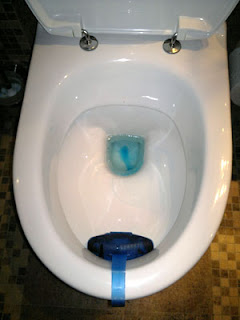 ...could only come from the mind of a woman. An evil woman at that. And before you wags ask me if there's any other kind, let's just stick to the facts. This toilet freshener releases a dark blue dye with every flush.  You can't hang it on the sides of the bowl, as it won't extend down to the water stream. 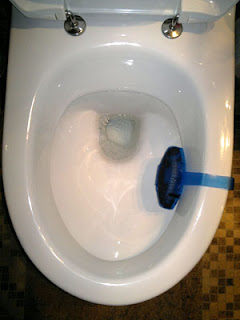 Nope, it only works front and center. Perfectly out of the way when a woman sits down.  This is a good thing, as this is usually their only option. Now, on the other hand, your average male has some dangly bits that would line up just about exactly with this blue dye-soaking device if he sits down.  Did I say "would"? Well, I meant to say "damn well surely do"! To be fair, I'm not talking about my normal home situation (and yes, the oxymoron is not lost on me). The photos above depict what awaited me at an otherwise splendid hotel during a recent weekend trip. But because I don't usually expect sabotage in my commodial consultations, I parked myself as I always do.  So, when I got up, ...well, I can't be overly explicit, but here is a reasonable visual representation of my subsequent status: 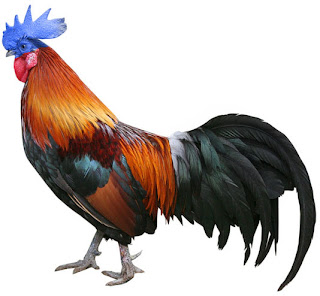 Admittedly, I may have, once or twice in my younger days, suffered from the condition known as "blue balls", but in this case, as the internet memes say, "UR DOIN IT WRONG". And did I mention that this cerulean crap doesn't wash off right away? Noooo! So, I ask you, which gender stands more to lose by inventing such a savagely subversive atrocity? Or, better put, which gender would derive infinitely more secretly evil glee from it, passively-aggressively ensuring that their number-one complaint about men will remain ever-unsolved and therefore fertile bitching ground?

Yeah, I thought so.
So, even as a reasonably considerate and enlightened example of the species, if I am to be faced with the choice of risking the recrimination of a vertical-stance aqueous dispensation, or to tote a turquoise-tipped tallywhacker for a week, then of course that lid is going up and the cards (and everything else) will fall where they may. Me personally, I'll probably remember to put it down again when I'm done, but I obviously can't promise the rest of my gender to follow suit. Which guarantees our collective place at the top of the survey for the foreseeable future. 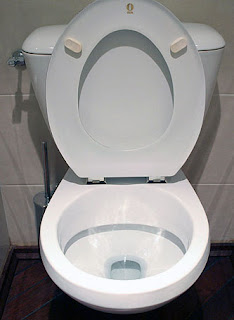 Maybe I can learn to clip my nails in the sink instead.
Inflicted by Volguus at roughly 3:14 PM