In Part 1 of what will most assuredly be a richly continuing series, I present to you a shining and all-too-common example of Bucharest motorist sensibility... 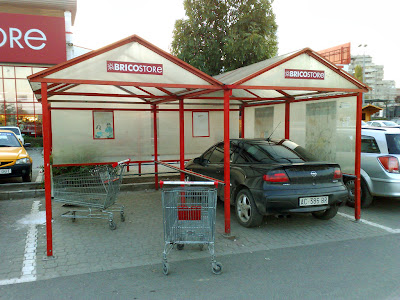 This caught my eye at the local DIY (Do It Yourself) hardware/houseware place, Brico Store. The little kiosks shown here are for storage of shopping carts, as evidenced by the few remaining carriages. In fact, there were very few carriages at the time, probably mostly because it was just before Christmas and the shopping frenzies here, while not yet as fatal as a Long Island Wal-Mart, do quite sufficient justice to the burgeoning spirit of capitalism that drives the EU's latest market economy. However, it bears mentioning that since these carriages were not the type where you have to unlock them from their chained captivity by means of a coin in a slot (which theoretically increases your incentive to properly return said carriage in order to get your coin back), it cannot be discounted that a fair number of these handy utilitarian transports have possibly taken up permanent residence in the surrounding neighborhood domiciles. But I digress.

The facts are that while the shopping cart house may have been empty, so were a significant number of normal parking spaces adjacent to it, which can even be seen in the photo. So I'd love to know what compelled our humble motorist to deem himself superior enough to naturally assume Brico Store had custom-built a covered parking space for him, their most valued customer? It was a gray cloudy day, granted, but not raining at all, so the excuse of a roof from the elements won't fly here. It's not even a particularly significant make of car, just your run-of-the-mill Opel economy job, the door of which our brainiac probably gave a good dent to from whacking it against the central crossbar of his carriage-kiosk garage. Sharp-eyed readers (yes, both of you) may note that the license tag on the Opel is not Romanian and perhaps I should be more forgiving of the stranger in a strange land who may not know our ways. To which I humbly reply: bollocks. The very fact that you read this is living proof that Bucharest contains its fair share of obnoxious foreigners who can still function quite suitably in this society. And parking, despite the impression you may get from even a moment's observation in any of the area's new mega-hyper shopping malls springing up like mushrooms in a fresh damp dungpile, is not rocket science. Put your car between the lines, how hard can it be?
Okay, maybe you're right, this is not the best city in which to pose that particular question. After all, I did say this was going to be a rich and full series, didn't I?
Inflicted by Volguus at roughly 8:49 PM