Stop rubbing the car so hard?

It is said that Bucharest has two seasons of the year; dust and mud. We are firmly in mud season. The rain comes down so full of dust from the very air that the average car can become an adobe hut from just one downpour. Add to that the road splatter from the motorists in front of you (and when are there not?) and the streets become a sea of identically-colored turds on wheels, with naught but the windscreen and the license tags cleared enough to stay legal. This brings about a huge upswing in windshield-wiper usage, and the attendant squirting of cleaning fluid onto the glass, which brings me to my observation.

The next time you're driving in Bucharest, or perhaps any similar European hamlet, keep an eye out for other drivers who may be washing their windshields. Stoplights which face into the sun are probably the best places. Check out the sheer number of these cars which squirt their cleaning fluid straight up past the windshield, and clear over the car itself onto the car behind them. I kid you not, it's got to be at least half of them, if not more.

The first time I noticed this happen, I thought to myself, "huh, poor kid must have bent his washer feed tubes last time he worked on the engine or such." But then I went through a few days of those sun-facing stoplights like I mentioned above, and was flabbergasted. Nearly every car which sat there squirting, shot their payload straight over the car onto the hood of the one behind them. I am stone-cold serious and not exaggerating. I really need to get photos of this but it's a fleeting thing, like a Bigfoot sighting... over before you can hit the shutter button.

I can't even blame manufacturing standards, as this phenomenon runs through all makes of cars - from Dacias to VWs, Renault, Citroen, Toyota, and yes, even BMW. I haven't seen it happen on anything more expensive, probably because people rich enough to own them are also rich enough to bribe the mud to stay off their cars. But I digress.

I'm still working on a grand unified theory to explain this, but there are too many variables. The main one is if this is confined to Bucharest or not. All I can tell you is that this wouldn't happen in the US. If your car squirted water on the one behind you, the drops would not hit the bonnet before the driver would be on the phone to his lawyer and the summons printed and stuffed under your wipers for assault, harassment, unsolicited wetting (ever since this one succeeded against God for raining on my mom's neighbor's Hummer, the door's wide open) and of course emotional damage always gets thrown in both to the driver and his car. So the Americans make darn sure their cars squirt correctly.

No, the fact that this phenomenon spans such a range of models and makes, means there must be a common point among all of them apart from manufacture. The first suspect which springs to mind is RAR, the Romanian Auto Registry. From what I understand, no car is unleashed on the road before being inspected and approved by RAR techs. They had my car in their bay for most of the day, probably because it was, at the time, quite foreign to their eyes (more on this another time), but what I'm theorizing takes only a few seconds. Namely, as part of the "routine inspection" of all cars entering Bucharest's corral, some qualified service person simply gives the windshield feeder tubes a twist upward. I hear you ask, "For God's sake, why would they do that?" Well, I didn't say my theory was done, did I? On the list of the most well-known things, just above "water is wet" and slightly below "politicians are corrupt" is that Bucharest streets are overtaxed. The figures, as I have heard them, put the city as having to support over 2 million cars a day on streets which were designed for up to 30 horse-drawn carts. And while the horse-cart contingent has steadfastly maintained their right to the street even to this day, 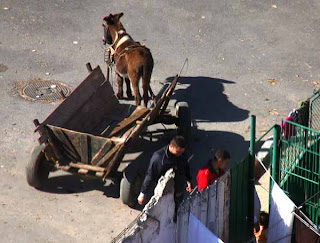 the fact remains that Bucharest traffic needs to be more efficient. Since pigs will fly before the roads are redesigned, the only other option is to change the behavior of the drivers. Recent studies have revealed that the average Bucharest street is full of needlessly wasted space, up to as much as 6 centimeters between cars during rush hour (4:00 am - 11:30 pm). If these drivers were less selfish about their vast personal space and simply moved closer to each other, then more cars could fit on the same stretch of road, and this cannot help but be more efficient.


RAR to the rescue! By adjusting the windshield washer tubes of all the cars, the only way to get your own windshield wet is to get right up to the car in front of you. The laws of commonality dictate that if you need your windshield washed, then it is likely so will the driver in front of you, and the one in front of him, and so on. Thus, with just a modicum of luck and timing, the result is a neighborly cascade of faintly blue rivulets of cleansing goodness arcing from car to car, pulsing in time with the wiper blades in a drippy ballet straight out of Busby Berkeley. And no more wasted space between cars. It all seems so clear now! The historical efforts to compel society to work together for the common good have not entirely left the building, it seems. But those of the past were too ambitious, too grandiose. Now, starting with something as subtle as bent windshield washers, society is made to want to work together for each other's benefit as well as their own. From here it is only one small step to discover how many other areas of day to day life are missing mutual benefit from proximity. Surely there must be a way to tighten up all that space between people at the queues of the Post Office or the cash registers of Carrefour or Cora and derive some benefit from our newfound closeness.

Oops, sorry, that was the alarm to take my medication. Gotta go...
Inflicted by Volguus at roughly 10:53 AM