Romanian Jokes Used to Confuse Me, Until I Became One

I have a few friends who doggedly maintain the attempt to translate the Romanian humor that flies around our dinner tables. Invariably, however, the conversion from Rom to Eng is virtually the conversion from "Howl!" to "Huh?" And it's not usually a fault in translation, as one friend is a proven pro at translating not just the words of a thing, but also the meaning and spirit, even unto wordplay. Nor is it my lack of a sense of humor, which in all modesty is quite developed, mostly for reasons of survival. Nope, it appears to be the actual content which leaves me cold, for what is hilarious to an historically impoverished, oppressed Balkan seems, at best, surreal and at worst, incomprehensible to an historically overfed, privileged American. No common frame of reference I fear.

Here's the example that started this entry in motion, as translated to me with significant care: On a sweltering Bucharest summer day of 40 degrees, an old man is walking about in full winter clothes, sweating profusely. Someone asks him why on earth he is dressed like this in such weather. He replies:


If you got anything from this besides the sound of virtual crickets chirping, then for god's sake reply to this entry and tell me what I am missing. My dinner guests were laughing so hard I feared for the dryness of the seat covers.

But I digress. I came here today to write about the best way to understand a "situation:" live it.

THE SITUATION: My car, an American sports import, needs new brakes for the back wheels.

At minimum, if all goes perfectly from this point, I may have my parts in another 5 - 10 working days. I'm crossing my fingers but not holding my breath. There will be another chapter to this saga but I needed to write down what's happened so far before I forget, or at least mellow my recollection with the passage to time. Stay tuned.

So, the ultimate point of this entry is that to understand the humor derived from the average Romanian situation, I suppose it's necessary to put yourself through one or more average Romanian situations. Whether or not this is true, I have to say it works for me. At least, I think it does. I choose to interpret it as simply timesaving if, when confronted with a joke like "It's the situation!" that causes everyone else to laugh until they cry, I just skip ahead to crying.

I'm happy to admit I may have been a tad harsh on my UK parts supplier. On Monday, as noted above, I made the wire transfer. On Tuesday I wrote to them to remind them to check for the payment. On Wednesday, they wrote back simply "payment received, parts sent" and a tracking number. On Friday, I left my cellphones at home so I didn't catch up on my business calls until too late at night to return them, but there was an unfamiliar number which I then called back today (Monday). Turns out it was the courier wanting to know if I'd be home to receive my package, which means it could have even been here on Friday! So, I stayed home from the office, and sure enough the bell soon rings and I suddenly get a taste of how Moses must have felt when he received his 10 (15?) commandments from the Almighty: 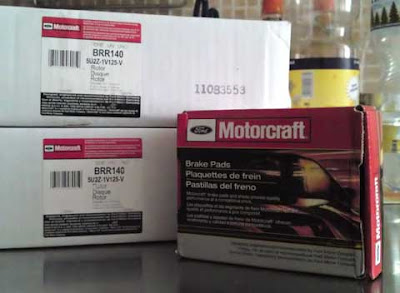 With the help of a helpful helper, these puppies went on in just about two hours. In fact, the last lugnut was being tightened just as the first fat drops of a thunderstorm rolled in. Okay, they were also the last fat drops, it being a particularly low-producing storm more concerned with filling its quota of thunder and lightning than actual moisture, particularly worrisome since by then I was in the shower trying not to think of the "Mythbusters" episode where they proved, via frying a mannequin, that people do indeed get struck by lighting inside a house during a storm if they are silly enough to play with water and the metal fixtures it comes out of, but I digress.

In conclusion, I am in a place of life right now where I am bombarded by so much conflict and bad news that I cling onto every tiny success like a lifering in a perfect storm. After many false starts and dead ends, fixing the brakes on my damn car will do just fine for awhile. The fact that I can hold my head up without shame again because I'm not driving a mobile food processor anymore, actually overshadows the stupid insanity that stole six weeks from my life for a chore that should have taken a few hours, tops.
Inflicted by Volguus at roughly 4:25 PM