Ahuh-huh... me fix it all by myself

I leave a client meeting this morning and the car doesn't start. Not the dead battery kind of not-start, nor the out of gas kind. All the lights, fan, horn work fine. So I go to throw the shifter (it's an automatic transmission) into Neutral to push it into a better parking spot while I figure out what to do. The shifter feels wrong, it doesn't click into the places it usually does. But I finally do get it to a spot where the engine will start, and by jiggling it a bit more it lets me creep home clear across town in 1st gear.
This kind of stuff terrifies me. Not because I don't know the first thing about fixing cars, actually the opposite. I know quite a lot, but the biggest thing I know these days is how little of it I can act upon because of my circumstances. I have an American car not in America. It took two weeks to replace a busted window and while most of that time was waiting for parts, a good chunk of it was the Euro-trained metal car mechanics crash-coursing themselves on how to tear into good old American plastic. I had to turn away with nausea when I saw the first stab into the door trim with a screwdriver and hammer, and the missing pressure-fit connectors that were broken off outnumber the ones that remain. For an apparently big-ticket catastrophe like my current non-shifting, I couldn't bear to think of the National Lampoon's Vacation-esque farce I'd endure to get it fixed, not to mention the delay and cost ("How much money you got?"). Therefore, I figured I had little to lose by taking a looksee myself and see what I could see before throwing myself on anyone's mercy.
I guessed from the characteristics of the problem that it lay somewhere with the linkage connecting the shift lever to the transmission. Thanks to the wonder that is the Intarnetz, particularly a car owner's forum populated with slightly disgruntled automotive workers, I have the complete factory shop manual for my car. This showed me that the "linkage" is actually a newfangled cable setup with a plastic clip that holds the tension where it belongs.
Aha, plastic. God bless America, where nobody has a problem putting a flimsy plastic piece where a sturdy metal one should be. One bottle jack later and I was sliding myself under the car, realizing in no small way the truth of my delusion as to how much weight I've actually lost of late. Here's what I saw: 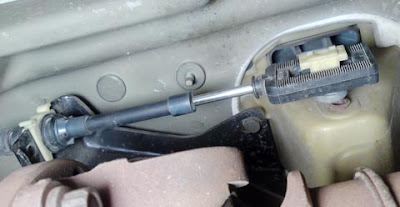 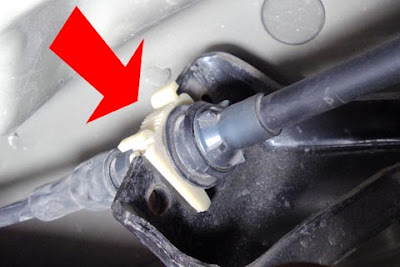 Of course, it didn't occur to me to take photos with my phone until the work was all done, but the white clip that holds the cable in the black metal bracket had slipped out of there entirely. There were two barb things at the top and bottom of the clip, which click into the two holes in the metal bracket, visible immediately above and below the clip. They are designed not to let go again unless they break. And they not only weren't broken, they had no signs of abrasion or other use. All I can guess is that the clip was never fully pushed into place to begin with, thank you American workmanship. The clip slid into place easily enough now, and while it took some leverage with a large screwdriver handle, it slid all the way in until the barbs clicked soundly into place. That clip ain't going nowhere now and the car shifts exactly as it should (and did).

Anyway, I complain but the truth is that this was worlds better than the alternative - attempting to have an American car fixed in Romania. Even the thought just gives me a shiver. But the laws of entropy being what they are, I'll have to face that music someday and must prepare myself!

Inflicted by Volguus at roughly 4:12 PM