Not exactly "Baby on Board..." 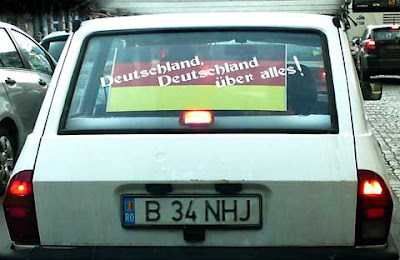 Okay, I admit it - as an American, you tend to preconceive a tad when you see something like this. But in reality, the German national anthem is a good song that got a bad rap thanks to the connotations added during WWII. http://ingeb.org/Lieder/deutschl.html


I would like to believe this is an expression, admittedly highly dramatic, of simple patriotism for one's homeland and not a four-wheeled recruiter for neo-Nazis. Still, this is taking a bit of a chance. Even a historically Ameriphilic Romanian would nowadays throw a brick as likely as a cheer if I drove around with a big Old Glory in my rear window splattered with a few lines of Scott Key? My personal pick to drive home the analogy would probably be,


"Then conquer we must,
When our cause it is just,
And this be our motto,
'In God is our trust!'"


In fact, Germany and the US might be said to have an interesting similarity in that they were both transformed into planetary pariahs by 8 years' arrogance and stupidity of one man. Ours just happened 60 years later. Who says history doesn't repeat itself?


But I digress. And the above photo is probably nothing to worry about. Bucharest already has one recruiter with a monopoly on bulky, brainless, skinheaded bullies: BGS Security.
Inflicted by Volguus at roughly 3:08 PM