Not all my Shots are Cheap...

In honor of the Anti-Crisis Business Networking Meeting in Bucharest today, here is a small reminder that other than wasting my days away diatribing on a blog, some of my other endeavors actually have some value: 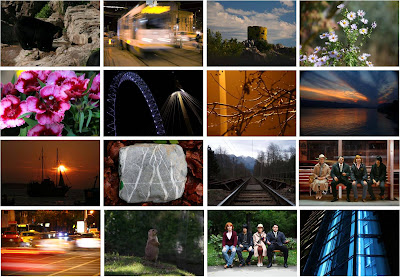 That's right, tremble in fear, mere mortals... I own a camera! HAHAHAHAHA!

In point of fact, with the evolution of convergence technology, specifically cell phones, it's getting harder to find people out there who don't own cameras. And don't pooh-pooh those camera phones, either. My Nokia N93 had a 3mp camera with Zeiss lens and a 3x optical (not digital) zoom. That gave it the honest equivalent of a 9mp camera. And my new LG Renoir is 8mp right out of the box. Considering some of my early floral shots from 2003 were done with a 3mp Sony Cybershot, it shows how far digital cameras have come, and ironically, how little of "good photography" is determined by megapixel count. In fact, unless someone out there comes up with some REALLY good software, and in which case he will have to be sequestered with Salman Rushdie to avoid the angry wrath of the world's leading photographers, cameras, no matter how good or expensive, remain in the category of tools. You either know how to use them or you don't. The world's most luxurious and well-made hammer, say, for example, the kind for which the Pentagon pays $2,000 each, is still useless in the hands of someone who can't hold a nail steady. A hydraulic automobile lift is worth nil if you don't know a generator from a geranium. And the new 21mp Canon EOS 5D Mk. II (and my birthday is coming, hint hint) is naught but a very glassy and metal-ly paperweight if you think "composition" is the report on amoebas your kid has due in Biology class on Monday. But I digress.

I take good photos. There's no getting around it. I'm not saying nobody's better. There are some awesome photographers even in my own small circle of friends. But if you like good photos and can't quite get the hang of doing it yourself, give me a ring up and let's talk. Some people have actually been known to pay me real money to take photos for them. If you would like to join this small but elite group of connoiseurs, I promise not to stand in your way.

Inflicted by Volguus at roughly 12:15 AM