Never a Sucker Gives an Even Break

The last few (sunny only of course) days I've driven to work, at the corner of Fundeni (Morarilor) and Pantelimon, there are a few boys working the stoplights handing out little printed ads to motorists. They appear to be gypsies (this is not racist, there is a physiognomy just as with any other culture and ethnicity) and they are having no luck handing out their ads. It's so cold out that nobody is rolling down their windows if you were handing out money, much less spam.


There is a woman on the corner watching them with concern, whom I deduce to be their trainer, supervisor, whatever, but who is clearly dismayed at the lack of results in this effort. Between red lights, the boys mope back to her and they argue animatedly. Gestures and body language suggest they are exchanging ideas of how to be more efficient, and simultaneously their opinions of each other's ideas.


A few thoughts cross my mind as I observe this over the course of several stoplights (Bucharest traffic, I might've mentioned it). First, I recalled that this type of marketing only seems to work when the distributors are shapely young women in revealing attire. Summer also plays an important factor, where windows are much more likely to be open. Combine the heat of the season with the allure of the approaching spammer and those little slips of paper get snapped up like euros... which are also admittedly little slips of paper so the metaphor is not as dramatic as it could be. But I digress. Expecting this formula to work as well with the small substitutions of subfreezing winter and grubby apathetic future vagrants was a loss before breakfast was even drunk.


Next, it occurs to me that while my personal opinions of gypsies may be considered racist, albeit overwhelmingly shared by the populace and, not insignificantly, supported by facts, data and even the most casual observation (see my earliest blog entry), I try to give everyone a chance. And the fact here is that there appears to be at least two gypsy boys actually trying to make an honest living, and exerting a real effort for a job that's got to pay a pittance at best. This deserves my respect.


So, a few days later when I'm driving the same way to work, I see the same boys working the same intersection. My respect actually raises a notch because now I can add "perseverance" to the list of unexpected qualities before my eyes. So, this time, as they work the line of cars which mostly refuse to open their windows (it is still subfreezing after all), I am now inclined to open mine and take one for the team.


Instantly a small booklet is pushed into my hand. It is a booklet about roofing materials. I'm wondering how someone fills a whole booket with a roofing ad when the pages of the booklet begin to slide apart from each other. They are in fact unattached to each other, and they are all identical in content. What I have been handed is a stack of single-page ads. 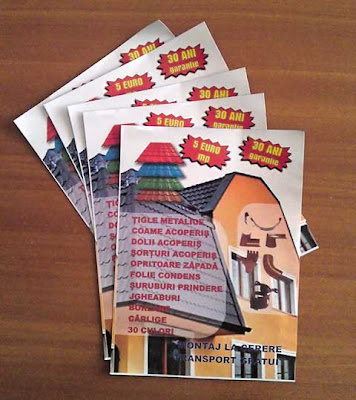 While I'm absorbing all this, I realize the boy has been talking to me through the window. I still don't know much Romanian, but being a daily motorist in this town there are a few phrases I've learned very well, and "bani, te rog, cinci lei, domnule" is one of them.

So, let's sum up. Not only is this little bastard falsifying his success rate at his job (now obviously measured by how many papers he gives away), but he's using it as a cover for the standard tactic of begging at stoplights. Now I'm sorry to say this, but in 5 years of daily driving in this town I can absolutely put stoplight beggars into 3 distinct categories: pensioners, disabled and gypsies. Since our young entrepreneur was obviously young and hearty, only one category fit him and it seems my lesson for the day was that a leopard does not change his spots.

W.C. Fields said "never give a sucker an even break." I wonder if one becomes the sucker by trying to give an even break?

Inflicted by Volguus at roughly 11:29 AM