Can One Flashlight Make You Go Blind?

In the USA you have Harriet Carter. In Romania we have D-Mail. Well, D-Mail is actually Italian in origin, but the neat thing about the EU is that something from one member state often winds up in the others sooner or later.  Especially if it's debt, and especially if you're Greece. But I digress.

Spotted in this month's catalog: a hand-operated flashlight. Not just hand-held; hand-operated.  Meaning no batteries, built-in generator, yada yada. Nothing new here, except instead of squeezing a trigger to create the power, or turning a crank, THIS flashlight appears to "get its charge" from the application of a previously-thought-to-be-highly-private maneuver. In simpler language, folks, you wank it.
Okay, I'm pulling your leg. Upon reading the Romanian description to the best of my ability, you actually charge the flashlight by shaking it, not spanking it. It moves with your hand, not against it. The motion apparently oscillates a tube-shaped coil thingy over a cylindrical magnet thingy, if the photo (and my infantile grasp of electromechanics) is any indication. But come on, people, look at this again! 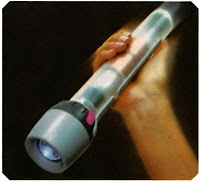 If that isn't the spitting image of what no Catholic male would ever do, then I don't know what is. I'm wondering if this thing has an "anti-slip" housing to maintain sturdy grip even after hair growth.
The trouble of course stems from ill-applied motion blurring, because while you want to show how to shake the flashlight, you don't want to blur the product itself beyond recognition. Result: most of the flashlight isn't motion-blurred but all of the hand is, tricking the casual observer that the hand is moving but the flashlight is not.  Religious upbringing notwithstanding, medical studies prove that this procedure gets results out of other things besides flashlights too.
Maybe this is an early April Fool's joke from those wacky D-Mail folks, because this item seems doomed from the start.  Once you eliminate the potential buyers who aren't perverts and therefore wouldn't touch this thing with a 3.048-meter pole, and then the potential buyers who are perverts but would rather others didn't know they are perverts and therefore also wouldn't touch this thing with a 3.048-meter pole, all you have left are the few of us people who are perverts and don't care who knows it.  And they like it dark.
Inflicted by Volguus at roughly 12:31 PM