Parking Pay Machine With An Attitude

I wouldn't have believed it if I didn't see it. But last night, after a press event at the Intercontinental (not to be confused with the adult undergarment expo at the Incontinental), the crowd of dozens descended en masse to the parking garage equipped with one solitary automatic pay machine. A marvel of technology, really... it allows over twice as many people to wait for less than half the speed of the older, outmoded human-style cashier.  The main problem is that it has to give change.  Taking these lemons and making lemonade, the machine we encountered last night apparently employed some sort of Artificial Intelligence to ensure that its interaction with humans, while unable to be accelerated, would at least be entertaining.

Standing in line behind 7 or 8 other people, we had ample time to watch the thing in action. Normally the charge for parking would be 4.50 or 8.50 and people would slip in a 5.00 or 10.00 note.  The machine could and did spit out 1.00 notes in return, and .50 coins. It did this for the first 6 people, slowly but not maddeningly so.  To be fair, the slowness of the machine was easily matched by the time wasted by the idiots who consistently waited until they arrived at the machine, slipped in their card, and read the amount due before it occurred to them to even reach into their pockets or purses for the cash. But I digress.

Customer #7 arrived at the machine with a 50.00 note.  Possibly he had nothing else, but since the uncharitable view is always more amusing, I think he was simply flaunting his wealth, or appearance thereof, by implying he had plenty of money, of which this was the smallest he would deign to carry.

Apparently the parking machine took this view as well, because of the 40.00 or 45.00 due back to the guy, it paid all of it in .50 coins. No bills at all, just 80 or more coins clinking out at the agonizing rate of about 2 seconds per coin.  We stood there for almost 3 minutes in Carbon Monoxide Hell waiting for Moneybags to get his change. Even so, the chuckles up and down the ever-growing queue voted this the second most entertaining event of the whole evening. The first being of course, guest singer Paula Seling, whose amazing voice defies physics.  Not because of its range, which is quite admirable, but because I don't see how she could draw in enough breath to sing while wearing that very tight red... but I digress again. Definitely. Ahem.
Finally our guy ambles away, pockets bulging and clinking.  Just about the same time I speculated aloud that the machine must have run out of bills, the lady in front of us slipped in a 10.00 bill and got 2 singles back out of the slot.
WTF?!? This machine had a definite attitude.  It was as Romanian as any human clerk, attendant or secretary.  It was king of it's own tiny realm, it held the only solution to your needs, you had no choice but to deal with it on its terms. So damn if it wasn't going to enjoy its moment of power over you by being as capricious and uncooperative as possible, in direct proportion to your intolerance for it. The average Joe may squeak by with a minor delay.  But Mr. Pretense is going to be taken down a peg, have no doubt.
I had no doubt, and I wasn't giving it the opportunity.  We put in exact change.  Now it was the machine's turn to say "WTF?!?" After which we could clearly perceive it also humming angrily, "How am I supposed to cause any trouble with this? It's not fair! Come back here, you!" But by that time we had run halfway to the car, safely out of range of the EMP that the machine must surely have beamed after us in spite, trying to short out our mobile phones... 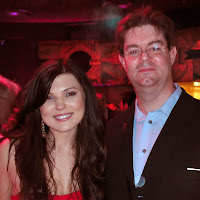 Beauty and the Beast
But if anyone else ever calls her "Beast," I'll kill them!
Inflicted by Volguus at roughly 4:01 PM