He Who Lives By the Pixel...

Within the past few years, Bucharest has become overrun with "video billboards." Because regular billboards in the town, which cover not only all streets but all buildings over 5 floors as well, had become so invasive and ubiquitous that motorists had inevitably become numb to them (okay, you caught me; Bucharest motorists are generally numb to everything), advertisers and the elected criminals they pay off decided to take things to the next level.  Result: billboard-sized video screens; some erected on poles, some attached to buildings, frequently apartment blocs, thus blocking the windows of several flats at a time. Glaringly bright at all hours, literally blindingly so at night, often outshining all traffic lights in the immediate vicinity. To say nothing of the folks whose homes (specifically, bedroom windows) face opposite these monsters... but since I just said something, I suppose it's too late to say nothing.
Respite, however brief, comes from an unlikely source: Bill Gates.  It seems these billboards largely run the Microsoft Windows operating system, and you'll be happy to know that it performs as solid and dependably in the commercial world as it does on your own PC. But what, on your laptop, is an inexcusable negligent glitch, is, on these obnoxious paragons to advertising technology, a refreshing karmic hoist on their own petards. 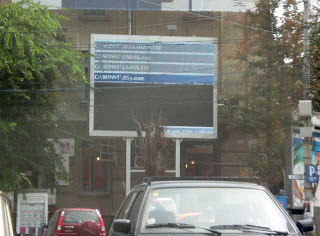 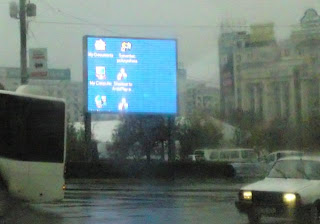 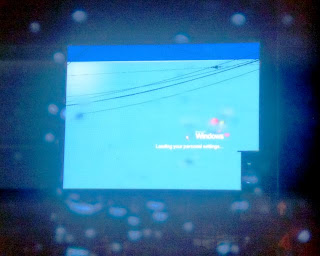 You can see how bright these atrocities are, from the first photo showing it clearly visible in direct sunlight, to the last photo which shows how, at night, nothing near the screen is remotely visible. So the only consolation is moments like these, when their money and energy is clearly wasted, however briefly.
Less poetic or justice-y, but to a tech geek like me, still entertaining, are other examples of Windows faceplants in professional venues.  You wouldn't explicitly wish these people harm from their glitches, but you might take comfort in knowing your Blue Screen of Death has plenty of company in high places. 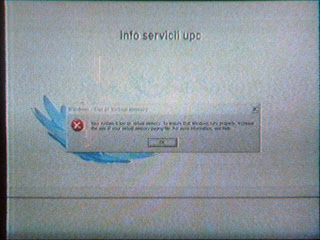 The internal "Info Channel" that the Cable TV company reserves on your service. This has happened since cable's earliest days.  I remember seeing similar Commodore Amiga error messages in the 90s. 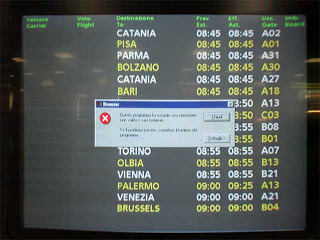 The Departures Screens of Milan Airport. All of them. Ouch! 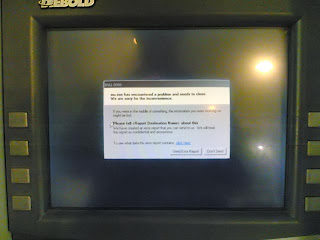 An ATM. Of course, the Windows glitch didn't cause money to fly out.
Ain't technology wonderful?
Inflicted by Volguus at roughly 1:13 AM