Take Your Karma Where You Can Get It

Driving down a narrow street during rush hour, stuck in the usual long line of cars.  Invariably, one or more hotshots don't feel like waiting. Since traffic laws don't apply to them, of course, they have no problem breaking formation and scooting along the wrong side of the road to get around everyone else and pull to the front of the queue.  This puts them sticking out into the intersection to obstruct cross traffic, but again, laws are for suckers.

Naturally, expecting the police to be around to handle any of this is a fool's dream, but even justice can't be denied forever and once in a tremendous while the idiot gets his. In this case, our idiot did his thing, scuttering down the wrong side of the road to get past us lawful losers. But at the very last second, an oncoming car turned the corner right in front of him. Gee, didn't plan on THAT, didya? 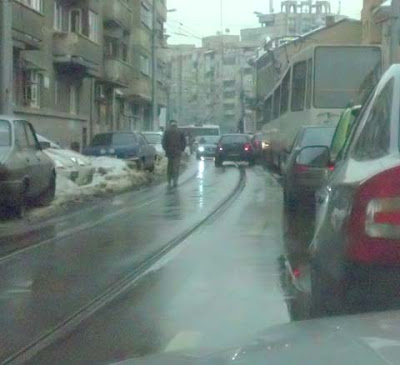 Normally when this happens, the scofflaw manages to frighten or bully the lawful oncoming motorist off to the side, usually onto the sidewalk, so he may continue on his lawless way.  But in this case, either the road was too narrow to detour or else our lawful motorist had (dare I say it?) a spine, and stood his ground.  Scofflaw had no choice but to throw it in reverse and back all the way up the street, garnering well-deserved waves and comments from his would-be victims along the way, ultimately taking his place at the end of the long line of cars, much further back than if he had simply held his proper place in the queue.
We didn't see him try again, so nobody knows if he'd learned his lesson and stayed in line, or found a new and exciting way to break traffic laws to get ahead elsewhere. But for one minute of one day of the normally miserable existence that is Bucharest, life was good. You learn to cling to these moments like drops of water in the desert.
Inflicted by Volguus at roughly 1:52 PM