But a bit of backstory may be needed here. Disregarding, for the moment, those silly World Health studies which prove all blog writers worldwide to be fetishists for pink-haired preteens, I was almost entirely made aware of "Lazy Town" because a local newspaper includes a DVD of episodes each week and my kid's watching them.  It's apparently a popular Iceland export, just above Bjork but below volcanic ash. I was actually made aware of the "Stephanie" doll (excuse me, Poseable Action Figure!) by a professional acquaintance who was pleased as punch to have found it for her young daughter... an avowed "Hannah Montana" fan.
Now honestly, could I look straight into the eye of this joyful nigh-unto-tears woman, bouncing-off-the-walls bursting with pride at her accomplishment and anticipation of her daughter's reaction, and tell her she'd bought the wrong thing?
Now honestly, could I look you straight into the eye and say if I did or not?

Hell yes I did. Choosing to hear it from me or from her daughter? No-brainer. I know how kids work. Hell hath no fury like a child who receives the wrong color Power Ranger. Remember "Addams Family Values" where the girl killed her parents for their birthday gift of Malibu Barbie when she'd wanted Ballerina Barbie? "Fiction," you decry? "Non-parent," I rejoin. So, while many lives were spared this day, it's not the point of my story. 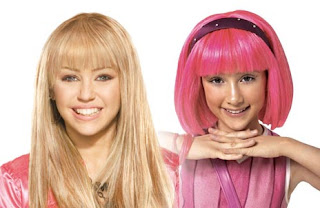 Hannah and Stephanie; Separated at Birth?
Maybe around the bangs I can see it, but sure as shootin' your 6-year-old won't.
Turning over the package in my hand (I specify again, "turning over," not "fondling" so no paedo jokes, okay? If you're a regular reader you know my thing is rechargeable flashlights), I discovered this inexpensive Asian import's entertainment value went, as it stereotypically does, far beyond its intent once linguistics are factored in.  It is at this point beyond which words will fail me so we'll just finish with the photos... 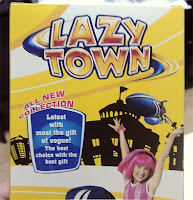 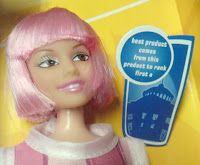 "Latest with most the gift of vogue! The best choice with the best gift"
"best product comes from this product to rank first a"
Next time you get the urge to complain about your odds with the lottery, just try to fathom the odds of a country with over 1.3 billion people in it and apparently not one English proofreader...
Inflicted by Volguus at roughly 9:59 PM