The question is not if some public figures are out of touch with reality. No-brainer. Sometimes it seems to be a job requirement. The only question is the style in which a particular individual disconnects. There's "entertaining" crazy, like Gary Busey and Charlie Sheen, who make you want to laugh, if a bit nervously. There's "dangerous" crazy, like Mel Gibson and Dubya, who make you want to run away or move to Romania, respectively. And then there's "offensive" crazy, thankfully a much rarer variety, but apparently personified in a local yokel named Ion Tiriac. And that makes you want to (insert excrutiatingly diplomatic restraint) slap the guy upside the head for further proving (as if needed) how jerks get rich while decent people remain broke writing angry blogs.


First, I'll preface this rant by admitting that while many of my diatribes are reasonably researched and referenced, this isn't one of them. This is me reading the Romanian news, where this guy is reverently quoted from TV as if he were the Voice of God, and thinking "OMG WTF?" because I'd just previously read stuff that, with the tiniest mental leap, exposes some serious stupidity and hypocrisy. This time, I'm just calling it as I see it. 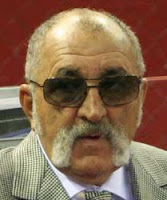 So, here's my take on Tiriac. Described as a "former tennis star turned businessman," I don't know what that's supposed to explain. Romania's other former tennis star also turned businessman, actually more politician, so maybe it's an injury inherent to the sport. Like "Tennis Elbow," except here you get "Tennis Megalomania" "...Yes, I used to bounce some little furry balls around, so I'm qualified to run a company, perhaps the country. Oh, and I also used to play tennis." The only problem with this theory is that US former tennis stars generally know their place, sticking mainly to endorsing painkillers and breakfast cereals. Okay, in the case of Kellogg's Honey Smacks maybe it's the same thing, but still, it's a far cry from endorsing an entire country.

So, here I am reading the local news, which admittedly is not guaranteed to be as objective and accurate as, oh, say Fox News, but still, the hot topic is Tiriac's Tirade on a TV show. Clearly the financial power players hang on his every word, of which some were (translated) as follows:

"Please tell me where half a trillion, 500 billion went, to mention only part of the GDP of the last 20 years. I should see this money somewhere. Where is it? I don't know."

At first glance, it seems a legitimate concern of a respectable businessman. Except two months ago, the same news site ran this story:

"Ion Tiriac was up to a most unpleasant surprise at the end of 2010, when a private investigation proved him that his son took almost 6 million Euros from the accounts of his companies."

So, Ion may not know where 500 billion Euros went, but he can find 6 million of it in his criminal son's pockets. Earlier news had the little angel arrested for drugs, and then, as now, Daddy's solution was to dodge the press, and oh yes, the law too for that matter, and settle it "privately as a family matter," undoubtedly meaning a stern lecture to Junior on not doing such stupendously stupid things... like getting caught. The son is obviously a bad apple, and they say apples don't fall far from the tree. But I digress. The moral of this story should be "people in glass houses" or "the mote in your brother's eye" or any number of hypocrisy proverbs, but instead it seems to be "If I call enough attention to others' ineptitude, maybe nobody will notice my own." A classic Communist tactic, I'm told by the way.

So, moving on to the next gem: In the same TV show (titled "After 20 Years" ...of what, they didn't say) Ion is flabbergasted that Romanians aren't taking advantage of the depressed housing costs and snapping up flats left and right. The small fact that all Romanians aren't billionaire former tennis stars turned businessmen with boatloads of dubiously-acquired cash for collecting flats as if they were comic books shouldn't stand in the way of this noble vision. 99% of the population isn't equipped for an increase in petrol prices, let alone the speculation business. Ion's answer? Mosey on down to your local bank, which is apparently dying to give loans. At what interest rate, I wonder, and with the average Romanian owning little more than a Dacia and a few potted plants, for what collateral? But never mind all this... the winning quote here was: "in Romania, there is a deficit of two million apartments."

Anyone with even the merest hint of the housing situation in Romania, would have their bullshit detectors explode at this one. But don't take my word for it, a survey by Ziarul Financiar revealed that in three newly-constructed complexes in Bucharest offering almost 1200 flats, 80 percent remain uninhabited.

Multiply that by at least 3 other such complexes in town that I personally know of, and how many more I don't, and also by the half-built complexes that may or may not even be completed for lack of demand (Planorama anyone?), and my very rough count indicates about 5000 brand new flats in Bucharest standing empty, right now. Now, in Romanian "nou" means "new" and "nu" means "no" (you have to say it out loud to appreciate it), but I'm pretty sure that "deficit" doesn't mean "surplus." What I am becoming sure of, is that the large deficit Tiriac speaks of may be between the ears. The absence of logic in his "advice" and the disconnect with his intended audience are insulting to the intelligence and, to say the very least, slap-worthy. And yet this is Romania's financial golden boy, the success story, the role model, E.F. Hutton the Carpathian.

Come to think of it, he didn't get there by himself did he? So who deserves the slap more, him or the sheep who empower him by worshipping at his feet? All of it is crazy, and most definitely the insulting kind.

I'll choose Charlie and his tiger blood any day.
Inflicted by Volguus at roughly 6:59 PM