A Study in Modern Exorcism

A bit ago, Romania made world news in an amusing-but-sad way (any other kind?) by deciding to start taxing witches on their income. Initially, witches responded by attempting to curse Romania's top politicos (by throwing poo in the Danube, as I recall), but this faded quickly as these old dears realized they couldn't compete. Not only were Romania's top politicos already cursed so much that they had plenty to spare which they were only too happy to pass onto the rest of us, which they did, daily, several times a day if possible, but witches were also rank amateurs in terms of experience in polluting the Danube. So, Plan B was simply to state in interviews that their incomes were so small, tax made no difference.  But this got me wondering: Romania is still so deeply rooted in superstition and mysticism, why aren't witches in Fat City, ala Rasputin? This morning I got my answer in the (as usual) least likely of places: the back end of a taxi.

Now, growing up around Manhattan, I knew that one often finds life's answers from taxicabs, sometimes because of really pithy bumperstickers, but mostly because the near-death experience that is a typical NYC cab ride just puts you that much closer to God. But this morning, my taxi-related revelation was as subtle as it was sublime. 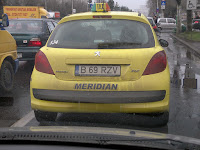 I dunno about elsewhere, but Romanian taxis aren't painted yellow. They're rather covered in yellow adhesive vinyl. This probably facilitates selling the car once it's usefulness as a taxi is done (but who would buy a car too beat up to even be a taxi any more?). Equally possible, it allows a cab driver who has been so surpassingly reckless and/or (emphasis on "and") offensive to finally bring down the threat of imminent death upon himself, to scamper into the nearest tunnel, forest, or other deserted area such as the "Romania Anti-Corruption" office, and with a hasty peeling session (think "Johnny Dangerously" Shelf Paper), slink back past their pursuers in a normal-colored car. But I digress.

In most cases I've seen, when it comes to the raised make and model logos on the car, the vinyl-appliers cut a hole in the yellow plastic for them to show through. This is a crude-enough look in itself, but as I now know, quite the lesser of two evils.  This morning's cab had had the individual letters of "PEUGEOT 207" pried off the painted surface (leaving what damage? I'd rather not know) and then stuck back on top of the vinyl. And this was my revelation at the red light. 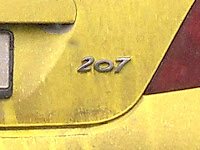 My graphic-artist eye instinctively knew something was wrong in the scene, like hearing one voice off-key in a choir. Eventually it focused on the taxi, and the bile rose in my throat like a tsun - no, too soon - it just rose, ok? The letters had been reattached with all the care and accuracy of a toddler's magnetic refrigerator alphabet. 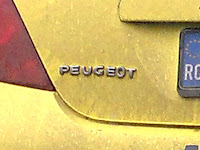 Part of me still insists that it's been done so incredibly badly that it had to be deliberate. But I've thought that before about work done in this town which obviously couldn't be so - from street repair (both instances), to bathroom tile installation, to building a shopping mall, you name it. Any and every job you can point to in Bucharest, and probably beyond, of any size, is invariably completed to about 90% and then abandoned. Or as they say around here, "finished." Attention to detail is non-existent to the point of being a negative value.
And THIS is why witches are out of work.
The key is the well-known and proven proverb: The Devil is In the Details.

If you don't bother with any details, in any job, ever, then you have no Devil.  The good witches have nothing to fight, and the bad witches have no source of power. And there it is. Contemporary Romanian workmanship is not criminally shoddy by accident or laziness, but by the realization that foregoing any details in your work is key to protecting your soul. To insist of a Carpathian craftsman that an edge be straight, a corner be 90 degrees, paint be at least one coat, a door meet its frame, or water spring from the tap instead of the wall, is to insist he risk eternal damnation in the hereafter.

Many cultures still suffer civil turmoil caused by their inability to reconcile modern society with ancient superstition. We've got it beat here, for sure! Most Romanians still harbor a reasonable concern for the fate of their souls, and know that periodic sacrifice to their god helps ensure it. Self-denial, pilgrimage and slicing open farm animals are so last century. Today, if you can manage to avoid the surfaces of any door, window, or flooring from fitting properly, or keep any straight edge or corner from any measurement ending in a zero, or reassemble something in nothing approaching its original completeness, preferably "how many pieces broken/missing" in proportion to "how much you were paid to fix it," then your place in Heaven is all but assured.
Inflicted by Volguus at roughly 2:48 PM