From the Vault: "Lemon" in Romanian - A Sour Subject 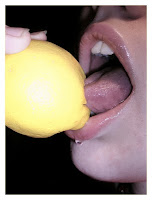 "Lamaie" contains both of the Romanian vowel sounds that don't exist in English (except for a brief period a few hours after Mexican food). The closest approximation that an English speaker can manage, changes the word from describing "small yellow sour fruit" into a vulgar term for fellatio. You can observe the correct spelling of the latter, spraypainted on the nearest building, wall or overpass, most often coupled with the name of a football team. The closest the two concepts ever come to being similar is if someone tells you to "suck a lemon."
I'm pretty sure "getting the expat to say 'lamaie'" is a rite of initiation to every new arrival, akin to fraternity hazing or snipe hunting. I also suspect it has significant potential for the canny expat as a pick-up line, but only under a very narrow range of circumstances.
Inflicted by Volguus at roughly 1:24 PM